TIPS AND TRICKS HOW TO IMPROVE YOUR HOME 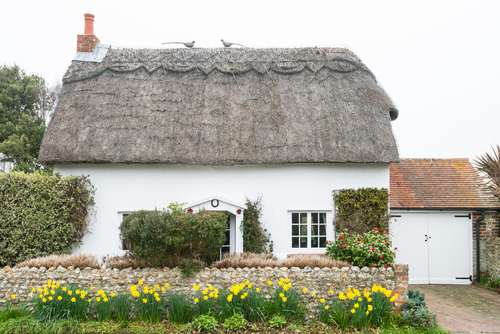 Traditional Roofing Trends in the UK

Roofing in the UK has gone through many different trends and materials over the years, and today, many of these traditional trends can still be seen on buildings across the country, especially listed and protected historic properties. While these roofing trends may not be as popular as they were hundreds of years ago when listed buildings were first built, traditions have been upheld to ensure any repairs made to them do not take away from their classic aesthetic appeal.

At Chris Ball Roofing, we are experienced roofing specialists carrying out roofing services in London and all our new roofs are fully guaranteed and underwritten by the CoRC (Confederation of Roofing Contractors) for your peace of mind. Our team of staff undergo extensive training in the application and repair of traditional roofing methods, ensuring we can take on any job – no matter what the size.

The History of Roofing in the UK

Roofs on UK properties were traditionally made with the materials that were available to hand at the time, and in many places, this was initially thatch. Thatched roofs offered several benefits and the materials were easy to get hold of and process wherever your house was in the country. However, the Great Fire of Southwark, London broke out in 1212 and changed many peoples minds on the continuation of using thatch. Even though it had already been banned within the capital city in a rule dating back to 1189, wooden properties constructed with overhanging thatch roofs caused the greatest spread of the fire and this led to a change in the materials used for building properties and shops moving forward.

After the insistence of using different widespread roofing material, roofing trends started to move towards tougher materials and clay, stone and slate were the most popular. That being said, the material used on your roof in the early days would very much depend on your location in the country, for example, the availability of raw materials for creating clay roofing tiles was dependent on a location being near to water – such as a river or the coast. Large clay deposits in the South East and Midlands influenced a greater number of clay-tiled roofs while access to harder slate in the North and in Wales made slate tiled roofs more popular.

Clay tiles had been used prevalently during the Roman reign, however as the Romans left Britain so did their methods and practices for making clay tiles, leading the way for use of thatch for roofing which was much simpler for common folk to harvest and process.

It was only in the 19th Century, once the modern railway was introduced to Britain, that materials and minerals start moving around the country in greater quantities, making it easier for different roofing materials to be used in locations they weren’t commonly found.

Modern-day roofing trends now include a wide variety of materials and types with an increasing encouragement for roofs that provide energy efficiency and protection against severe weather forces. Many property owners choose to install solar panels on their roofs to offset their energy costs while others make use of cheaper, more durable materials including steel and concrete.

Even back in the early days of roofing, people were selective over the materials they used as they wanted to achieve several things: waterproofing, warmth, protection from pests and a barrier against the elements. This is what led to the following materials to rise in popularity and be used across many properties at the peak of their use:

Thatched roofs are made using straws, reeds, grasses and heathers that have been cut, dried and bundled into ‘yelms’. These are carefully taken up to the roof and attached using twisted hazel sticks known as ‘spars’. The thatch trapped pockets of air between yelms, offering improved insulation against the cold outside air. When laid with the correct pitch, thatched roofs filtered rainwater quickly away from the property, preventing leaks and pooling. Although thatched roofs were commonly blamed for spreading fires quickly between buildings – efficiently installed thatch burns quite slowly and fires were often caused due to poorly installed burners, chimneys and flues.

While thatch is still seen on plenty of rural properties, the practice is under fire and, due to the Plant Variety and Seeds Act 1964, has restricted access to the quality materials that thatchers need to faithfully reproduce the traditional methods of thatched roofs. This has also caused the maintenance and repairs costs of thatched roofs to skyrocket, making it a fairly impractical solution for many homeowners.

Clay tiles are an extremely popular roofing method – still commonly seen today – however, the methods for manufacturing these clay tiles have changed greatly as technology advances. Old clay tiles, that were handmade, were subject to natural imperfections such as warping and twisting during the firing process. This meant that handmade clay tiles installed on roofs could be difficult to lay flat and this often leads to leaks and holes. Today, clay tiles can be mass-produced with very little variation between the tiles, ensuring a protective barrier against the elements and upholding the traditional appearance.

Clay remains a popular roofing material today as it is cost-effective, offers durability against the typically damp British weather, is fire-resistant and reliable. The iconic red clay tile has even become something of a British symbol itself and can be seen on residential properties, city buildings and even castles across the UK.

Slate isn’t the only stone material that is commonly found on British roofs; in fact, there were plenty of different stones used over the centuries – from metamorphic slates to limestones and sandstones. Historic practices of using stone tiles were to fashion each tile into a thin, roughly rectangular shape and then overlay these with large overlapping sections to prevent moisture and water from entering the roof space.

Metamorphic rock like slate naturally forms in layers before experiencing tremendous heat and pressure which makes them exceedingly strong, it can then be split into individual thin and strong tiles which are ideal for use in roofing.

When you are looking for trusted roofing services in London, don’t settle for a cheap solution.

Your roof, whether traditional or modern, requires care and careful maintenance to ensure it lasts and sufficiently protects you, your family and your belongings from the elements. At Chris Ball Roofing, we have generations of experience working with roofs of all types – from listed to new build.

Get in touch with our friendly and knowledgeable team today and find out about our roofing services for your London property. Call us on 020 8291 3388, email us at admin@chrisballroofing.co.uk or use our online contact form

x
We are currently experiencing a high demand for Pitched roofing work and consequently we are not taking any further new enquires for this type of roofing, we will update the website with further information as the situation changes. 1.3.21